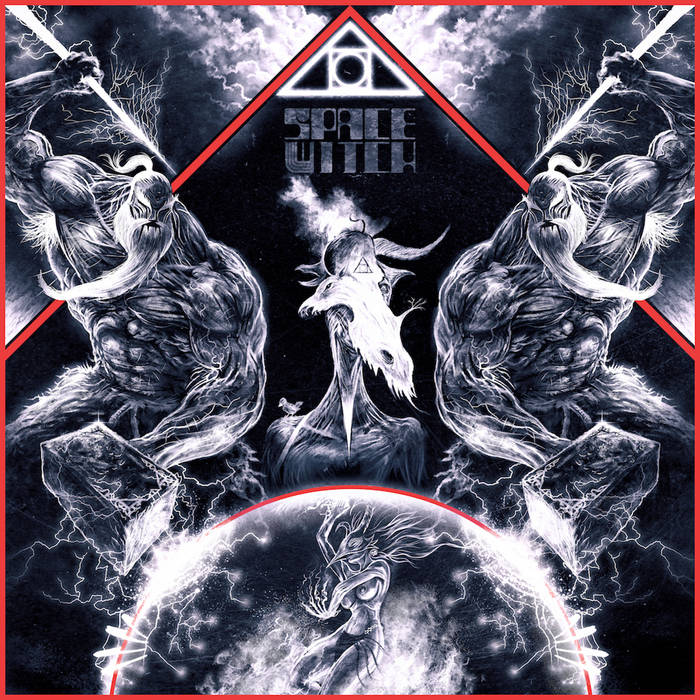 Sonny92 They're one of the few bands in Stoke-on-Trent that play doom / sludge. Of course I'm gonna support them! Favorite track: Alchemy Paradox.

Rod Ruiz If hawkiwnd and bongripper ever banged and had a band baby this what it would sound like... really good stuff Favorite track: Worship the Void.

Rhokeheart Awesome slow tempo drone/sludge/stoner. Get a physical copy while you can! Favorite track: Worship the Void.

Space Witch, the highly respected Instrumental Psych Sludge/Doom/Stoner Metal collective finally unleash their debut S/T album to the world. Has it taken this band over 7 years to release their debut album? Well, yeah it has. They released a critically acclaimed debut EP – The Alchemy Paradox in 2013 – which is one of the albums two tracks. Don't think that Space Witch have shortchanged you by adding a track they released in 2013 as they have not. However, more about that later.

The album features 2 tracks running for 30 and 35 minutes each. The 1st track – Worship The Void – is a psychedelic journey into the dark vortex of space as the band add haunting noises and sound effects with slabs of heavy Sludge/Stoner Metal played at a slow pace. Space Witch have added a more sombre drone based effect to their music as this song is heavy from the start. The band start adding progressive space rock elements to their music as time goes by. The guitar riffs and drums become more volatile as you can tell this journey is not going to end well. Space Witch has always had a sinister edge to their music but it really comes to play when they decide to throw caution to the wind and play epic jam based riffs. The instrumental work is jaw dropping at times as Space Witch keeps you on the edge of your seat.

As I said previously, the 2nd track is their 2013 debut EP – The Alchemy Paradox – in full. Though with a major difference. It might have the same name but that is where the similarities end. As Space Witch have completely re-recorded this track from start to finish. The song has more noises and effects compared to the original. Space Witch has added new musical instruments to the song, which gives it a richer and vibrant experience that will transport your soul into the far reaches of space. If you’re expecting fast-paced riffs it’s best to look elsewhere as Space Witch play at their own pace and no one is going to tell them how to play their music. This is pure sonic bliss from start to finish. This has a BONG like quality with the slow-paced doomy riffs combining with huge loud riffs that would make even CONAN blush.

Space Witch does not shy away from adding more layers of noise to give the album a highly intelligent outlook on all things metal. As this is some of the most complex and multi-layered 65 mins of Instrumental Sludge/Stoner Metal music I have heard this year. At times, I was thinking what is going on as Space Witch like to play with your senses and confuse you with drone-based noises that comes out of nowhere. You will need patience to listen to this album, as it demands your full attention as you will be rewarded with a truly amazing out of this world experience. Space Witch have delivered a monster. Space Witch are on the verge of greatness.

It's just been a little over two months since Space Witch released their last single Wychkrafft on Bandcamp and already their debut album Space Witch has now been released. The album contains two tracks, both a little over 30 minutes long, which is, don´t get me wrong, still too short for the amazing trip you have when listening this instrumental sludgy diamond of doom. I have listened to this album way over 25 times, and kept being amazed every time I listened.
The first track ‘Worship the Void’ starts with a slow, heavy riff that evolves to an even heavier version of itself. The second part of the track starts around the 6 minutes mark and awakens a riff in 7/8 that is both psychedelic and evil as fuck. The drums linger on in the best possible way, while getting a little heavier with every beat. Around 8 and a half minutes the lower frequencies drop down a little and solo-like riffs are played by both guitars. It fits the vibe perfectly.

After getting a little heavier again my favorite part of the track begins. At the 10:52 mark my mind gets blown. This riff, that will last pretty long, gets heavier and heavier and deeper and deeper. I get the inevitable feeling of getting blasted into outer space and see the world getting demolished. The riff keeps getting heavier and deeper and slower. At the 14:20 mark it´s utter Apocalypse. This is the riff that made me love Space Witch even more. The tempo, the pitch, the notes, the everything. This is the definition of sludge and doom to me. Mind that this is still in 7/8 and boy am I a sucker for signatures other than 4/4 and 8/8.
After this amazing part a new riff slowly kicks in and keeps going on till it hits a slower tempo. I'm not sure what the exact BPM is of the next part, but it sure as hell is slow. It gets calmer and calmer and with the right effects they create an almost ambient-like vibe. The same riff kicks in very heavy, right after the most calm part of the track. The riff will continue till the end of the track, with just the last few bars in single notes. The dynamics in this track are perfect, I could not think of a better way than this.
The second track ‘Alchemy Paradox’ starts heavy right away and provides some kind of wake-up call. This is the Apocalypse in music form. Very similar riffs keep getting blasted right at you. The riff blends perfectly into the next, and gets a little calmer after that. The effects over both tracks are perfectly placed, and fit the vibe extremely well, especially in this part of the track. A new riff starts to build up slowly and you can hear the doom building up in the way they hit the strings. The riff keeps going on for a few minutes but keep evolving until it 'finally' explodes after a sudden increase in fuzz. We now get introduced to an even calmer part than before.
After getting hypnotised by the amazing effects the same riff goes on, with a shitload of fuzz on top. Some higher single notes with just the right amount of reverb are heard in this part, it freshens the pool of fuzz up a bit. Space Witch keep on blasting riffs at you in a way you really don´t want them to stop abusing your ear drums. A sudden drop in tempo changes the vibe to an even more evil setting. Just after 27 minutes in the second track the tempo changes up again and gets to an almost stoner-like sound. It's amazing how Space Witch combine all these elements in a perfect blend, in the long tracks that they have. The track ends in feedback, and that's exactly the way it should be.
This is the album I have been waiting for so long. It's the perfect blend between doom and sludge. I am truly thankful that there are no vocals in these tracks, as them being instrumental they are giving you your own side of the story. I can not wait for Space Witch to gig in my country and if they don't get here fast I'll make sure to travel to where they are. This is my favorite album of 2014 so far and it probably will be till the very end.

This band is aptly named. Their music is magical and full of the mysteries of outer space all put together in a wonderful package and recorded for our entertainment. Groovy space rock has just been redefined by Space Witch. This album only has two tracks but they’re both very long so this is not an EP, it’s an actual LP. Although not on vinyl. Track 1 is entitled Worship the Void and it truly takes you out on a trip into unexplored sectors of your consciousness. There are no vocals but the riffs are groovy and are nicely complemented by each instrument. The lead work perfectly accents each part and by the end you’re fulfilled yet yearn for more. Well, if you want more you get more. Track 2 is Alchemy Paradox and this one is heavier, more aggressive. Of course that makes Alchemy Paradox my favorite of the two but you probably already knew that. Both songs are great, though, and this is an hour of the day you will truly enjoy and that’s only if you don’t hit ‘repeat’ on your MP3 player. This is one space odyssey that won’t end in catastrophe.

Space is trippy, Witch is heavy. Let it be known that the ones who are called Space Witch were spawned in the shining month of July 2007 AD in the kiln strewn kingdom of Stoke on Trent.

They unleashed their astral drone, and the peasants were afraid and they flung themselves down and prayed to the one, for they knew the time had come for the Space Witch. ... more

Bandcamp Daily  your guide to the world of Bandcamp